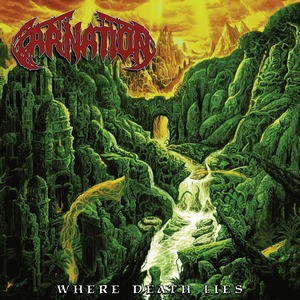 Again, an eye-catching display of color from Carnation for their second slab of old school death metal goodness. Just as the cover catches your eye, the band is very good at catching your ears as well. Many play old school death metal in 2020, but Carnation essentially grabs you by the throat and demands your attention as they bring back that grit and aggression that many fail to capitalize on. Making Where Death Lies a jovial and thrilling piece of music.

As with their debut, Carnation is all about the riffs. Not sure what they are doing to put them together, but man, they know how to make the death metal aggression bubble and ooze over the top and get you interested in it. The opening trio of tracks sets the stage for much of the release, focusing on adrenaline-fueled speed and crunchy mid-tempo riffing. There’s a bit of melody that comes across, but without interfering too much with the filthy and energetic vibes that the band maintains from beginning to end. They’ve also progressed their sound a bit too, in intriguing ways, with the last two tracks. “Reincarnation” has a more atmospheric side to it, complete with a brooding synth opening that goes a full minute before anything else is introduced. Here the band does dig into the melodies a bit more with a slower pace, but it’s a nice change-up from some of the more blistering tracks (like the title track itself). This trend continues with the final track, which takes advantage of its 7-minute runtime to flesh things out and even introduces some effective clean singing for a moment later on while doubling down on the immediate and hooky riffs.

Able to put together pummeling riffs like no one’s business and still keep it memorable, Carnation is looking to become one of the stronger acts within the death metal revivalist community. Where Death Lies brings the band up a notch while retaining all of their best aspects from the debut (those riffs!). A very worthy release for old school fanatics. 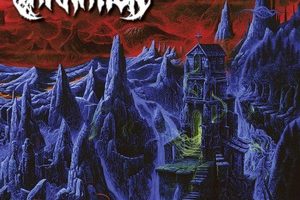