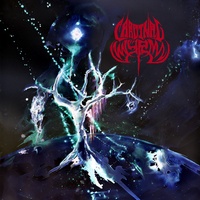 It’s cool (or “kool”) to be cult (or “kvlt”) at the moment, even if you’re essentially swiping ideas from those who are swiping ideas from others. San Francisco’s Cardinal Wyrm play a mystical, 70’s-based brand of metal that is well-timed in that it takes up the rear in the Ghost, In Solitude, Noctum, et al derby, where a howling vocalist is the guide through songs that are sometimes unnecessarily long, and devoid of originality. Alas, this is the situation for Black Hole Gods, the band’s sophomore outing.

The band’s presentation simply doesn’t feel fresh. Whether that comes from riffs that are often dodgy and simple, or the one-dimensional King Diamond-out-to-breakfast hum of vocalist Pranjal Tiwari, the fact of the matter is that Black Hole Gods limps along, unsure of its place. The elongated and plodding “Born in a Barren Land” is perhaps best proof of this, poorly placed as the third song in the album’s track listing, thus killing any kind of momentum generated from the threadbare, but mildly enjoyable “Deep Within” and “Dreams of Teeth.” And Tiwari needs to find a way to get out his one-note box, a hindrance that makes his vocals a virtual non-entity across the rocked-up “Warden of the Swans” or somewhat spooky “Cult of the Coiled Spine.”

Lots of limitations here, a lot of which can’t be helped by how en vogue this kind of rock/metal is at the moment. Black Hole Gods is just a poor rendering of the occult/mystical rock movement, one that has nearly been perfected by the band’s listed above. The band’s visual tidings might be able to skirt them by certain portions, but as a whole, Cardinal Wyrm are pretty forgettable.