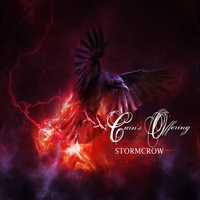 Once striking a mark in the metal world and gaining modest popularity/appeal based on a particular product, a struggle presents itself between churning out more of the same songwriting or continually challenging yourself (and your listeners) to join you on the magical creative rides from album to album. For ex-Sonata Arctica guitarist Jani Liimatainen, following five albums with the group, he felt the need to soldier on as his ex-band mates explored more progressive or commercial terrain. Cain’s Offering is the new entity, containing a couple of upper tier musicians in their ranks: Stratovarius’ Timo Kotipelto and Jens Johansson, while the rhythm section of bassist Jonas Kuhlberg and drummer Jani Hurula are competent at their craft if quieter in their relative profile.

Their second album Stormcrow comes six years after their Gather the Faithful debut, a record that contained a mixture of modern influences and AOR flavorings against conventional Euro-power riffs and runs. Adding Jens to the mix for this record gives Mr. Liimatainen the syncopated harmonic foil and companion necessary to rival classic Visions period Stratovarius and the first four Sonata Arctica records. Check out “Constellation of Tears” double bass flurry against the speedy finger runs and you can take it to the bank that Ecliptica factors into the inspiration. The follow up “Antemortem” features interesting symphonic flourishes that touch upon Nightwish territory (think “Storytime”), while Timo’s phrasing and delivery during the verses has off-time ingenuity while the chorus is amazingly rhythmic and repetitive enough to lodge deep in the cerebellum.

Not all is stuck in the past – “The Best of Times” contains a lot of cyber elements and catchy, modern riffing parts that could gravitate well with the Amaranthe crowd, while “Too Tired to Run” is a 6 minute plus reflective ballad that builds off its sparseness and simplicity: key vocal harmonies and piano passages carrying the weight of emotional connectivity. Ultimately the old timers desire high octane material that demands air instrumentation or audience participation, and you’ll get plenty of that through “I Will Build You a New Rome”, “My Heart Beats For No One” or the opening title cut.

Those who miss that late 90’s slew of records that converted many to the power metal legions such as Return to Heaven Denied or the aforementioned Sonata Arctica and Stratovarius platters need Cain’s Offering in their collection as well.