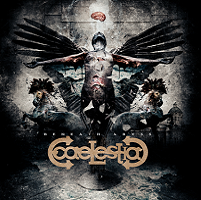 He does fantastic artwork, but from a mile away, you know it’s a Seth Siro Anton (Septicflesh) cover art job on Beneath Abyss. Such was the first thing that came to mind when Caelestia’s Beneath Abyss debut hit DR’s mailbox. A Greek sextet who formed in 2012, Caelestia subscribes to several of the norms that are a part of symphonic, female-fronted extreme metal. The regular volleying between manly and womanly vocals surely gives Beneath Abyss some balance, yet the whole thing doesn’t feel all that pro, perhaps lending to the notion Caelestia aren’t quite there yet.

Rhythmically, the album is all over the map. It wouldn’t be a surprise if the trusty ‘ole click-track was not used here, for a good chunk of these songs bounce all over the meter, most notably album opener, “Malleus Maleficarum.” Industry rule is that you place what amounts to your best song first, but in the case of Celestia, they went for it all with “Malleus Maleficarum,” only to have the song get clunked down in symphonic slo-mo. From there, the album never recovers, oftentimes bogged down by uninteresting riffing (“Gate of Shadows”), a poor use of Soilwork’s Bjorn “Speed” Strid’s vocals (“Blessing of Tragedy”) and the ill-fated mash-up of tuneless female vocals and Cradle of Filth-like extremity (“Lake of Decay”).

In truth, none of the parts really match up all that well for Caelestia. Female vocalist Dimitra Vintsou can’t be relied upon to carry a song by herself; she’s too far in the middle, hung out to dry in Goth territory. So as ambitious and full-scale an album like Beneath Abyss is, it’s certainly the type of effort that makes folks shudder a bit at the prospect of symphonic Goth metal.