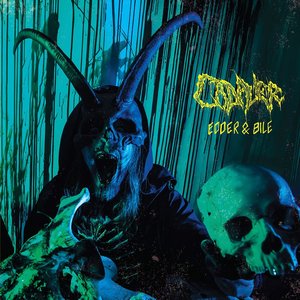 An early Norwegian act to enter the death metal scene back in late ‘80s, Cadaver has had a few iterations over it’s lifetime. A brief stint as Cadaver Inc at the turn of the century, as well as a few resurrections, this most recent iteration sees founder Anders Odden working as a two-piece along with drummer extraordinaire Dirk Verbeuren (Megadeth, ex-Soilwork). Edder & Bile is the pair’s first full-length output, after a quick 3-song EP earlier this year.

What Edder & Bile does best is to champion that oozing, filthy death metal sound without resorting to making the band sound too old school or gimmicky. Given the legacy of the band going back to the beginnings of the genre, they’d be rightly excused if they did go for a more ‘old school’ production, but instead, they’ve done a great job of capturing the beginnings and giving the whole thing a more modern feel…without it feeling too modern overall. A wordy description for a death metal act, but it only takes a few seconds of opener “Morgue Ritual” to come barreling through your speakers to completely understand it. It’s suitably raw and near-rabid in its snarling energy, from Verbeuren’s frantic yet tasteful drumming, to the effective volley of mid-tempo stomping and charging riffs and melodies that capture a more putrid and filthy vibe with ease. There’s a gritty feel to the whole affair, that when it speeds up feels like it’s moments away from falling apart in a deranged urgency, like the furious tone of “Reborn,” but they can also feel more murky in a few seconds when they hit the slowdown button the way they do on the title track. Some mid-tempo grooves and hooks provide the necessary balance, and allow some extra melodic touches to bring things all together (see “Years in Nothing” or “Final Fight”).

Cadaver captures the spirit and aggression of the early days of death metal, and gives it an effective modern injection. Thus giving Edder & Bile a more resonating feel and greater fun factor than other acts who are more content to simply regurgitate the same old death metal nostalgia for the umpteenth time. It’ll catch your ear without a second thought too.