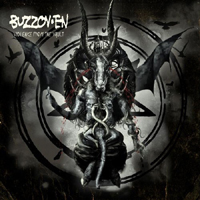 Seriously, who from the sludge/noise arena hasn’t poached a few ideas from Buzzov*en? The distortion, the crazed feedback, the elongated jams…all of this was done well before the new wave stoner/sludge kicked in. Their Sore album is probably the best thing they ever did, while …At A Losswas a notch below and then they split in a drug-addled mess. As a reminder of the band’s last days, a quintet of demo recordings in the form of Violence From the Vault has been repackaged via Relapse.

The level of unpredictability the band had a penchant for is still strikingly evident during the opening roar of “Mainline.” It’s almost as if Kirk Fischer’s were a third guitar

in the mix, that’s how noisy and raw this stuff is. Samples abound on the grating “Paintake” and “I Never,” while “Nod” is a hazy, drug-induced 15-minute jam that is just downright twisted. It makes no sense. And it makes Eyehategod look like child’s play.

Where the value of Violence From the Vault comes in is up for debate. These jams have most likely been traded, downloaded, etc. for years, but credit Relapse for bringing some much-needed attention to a vastly important band. For completists only. If not, dust off Sore. It will mess your day up.