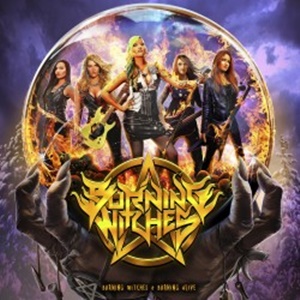 This Swiss traditional metal act Burning Witches has been gaining momentum following their release last year with Hexenhammer – their second album and first for Nuclear Blast. Seems only fitting that those who want to hear more from these ladies get exposure to their self-titled debut album, packaged with a four-song live EP outing to sweeten the pot. Those thirsting for a bevy of mid-tempo to slightly faster anthems filled to the hook brim in guitar riffs and fierce vocal melodies that bring classic references back to the horizon for a new generation, well you’ll find plenty to feast upon.

You imagine the robust titanic guitars and soaring high pitch vocal delivery against the thunderous, tight rhythm section work as a machine ready to destroy all who stand in the path – much like the glorious 80’s efforts of Dio, Iron Maiden, and Judas Priest, just brought into the modern age thanks to thicker and heavier tones and production techniques. It means placing a biting double-kick barnburner first for “Black Widow” – allowing the Painkiller-ish twin axe mastery and eagle-oriented high screams hold court at the appropriate times, then switching gears for a mid-tempo, melodic number with “Burning Witches”, the chorus intertwining Doro and Dio aspects to encourage crowd participation. It’s important in this revered style that all components interlace and shine at specific times – Burning Witches succeeds in that regard, especially through the multi-dimensional voice of Seraina Telli. She is able to convey a venomous semi-growl in spots, while ascending to Halford-esque high falsetto terrain all within the same song – check out “Bloody Rose” and “We Eat Your Children” for both aspects that keep you highly engaged, entertained, and headbanging away. The first studio album concludes with a cover of “Jawbreaker” from the Judas Priest album Defenders of the Faith – faithful to the original while allowing Seraina to add a bit of her personality to the delivery.

Buried Alive showcases the ladies live on stage – giving the audience three originals from the debut album, plus their Dio cover “Holy Diver” that would appear later in studio form for Hexenhammer. The band deliver the material in a raw, in your face format – thankfully leaving any backing track enhancement for those other musicians who misuse and abuse it. In the end if you need more of that traditional power-infused classic metal fix, Burning Witches will probably give that adrenaline push you desire. 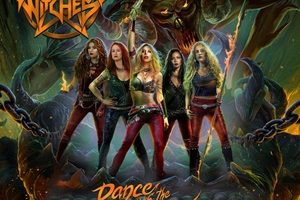 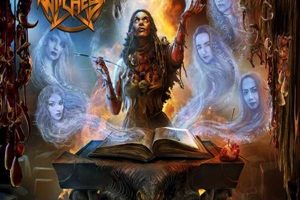