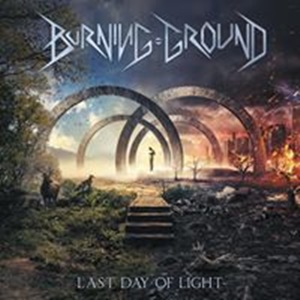 Originally starting in 2002 yet issuing their debut full-length Last Day of Light now, patience must be deep in the Burning Ground makeup to last 15 years in the underground, slugging out lineup changes, local gigs, and refining material. These 8 tracks swirl around a mixture of power, doom, and thrash-oriented riffs, which along with strong, melodic vocals and lengthier lead breaks could send most listeners back in time to a late 80’s to mid-1990’s style that just isn’t exposed as often today in a scene rife with extremes.

It’s hard not to notice the semi-operatic power prowess in the pipes of Maurizio Meloni – comparisons to Mike Howe and Dirk Thurisch (Angel Dust singer from their late 90’s comeback forward) abound in phrasing, punch, and projection through highlights such as “Before I See” and the mid-tempo Metallica-oriented “Darkened Desire”. Musically Burning Ground sit in that middle of the road power riffing with occasional doom or thrash flashiness – nothing that dynamically goes for the jugular, but sits in the pocket to elevate those fists and makes thirty to forty-somethings bang their heads. Steady double bass runs against darker chord choices penetrate in a Savatage manner for “The Killing Hand”, while Morgana Lefay meets Nevermore for the rhythmic and cultural shifts within “The Burning Ground” – an area the band hopefully continues to refine and explore down the line, especially given the superior bass activities from the skillful Alessio Melis.

Burning Ground seem comfortable keeping their material in an average six-minute window, yet occasionally veer into similar sounding hooks or endings that blend one track into the next – which could make song separation a potential problem for the listener. The calculated four-count riff/drum combination that finishes “Facing the Shame” is one instance where predictability rears its ugly head, and not to the good. In the end, Last Day of Light shows glimmers of potential, but falls far behind other benchmarks in their older power/doom/semi-thrash mold, where Angel Dust’s Bleed or Blessing in Disguise from Metal Church reside.