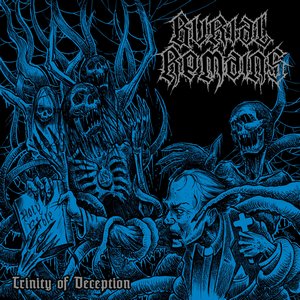 One of those albums that you simply know what’s coming as soon as the chunky, HM-2 buzzsaw kicks in on the first second, Burial Remains has their work cut out for them on Trinity of Deception. It’s all too easy to play into the ‘let’s play old school death metal’ for the 10,000th time, and even having a pedigree in their favor with Sven from Fleshcrawl handling vocals, it’s easy to hear the energy and passion pouring out.

That initial buzzsaw riffing will more or less determine whether you are going to dig this one or not. Some have simply tired out of the stuff, but understand that Burial Remains do come at you with everything they’ve got. Absolutely blistering at some points in the album, the usual sledgehammer clichés run abound, but they are rather true to what you are hearing. They don’t lay too hard into the ‘old school’ production either, which allows the HM-2 crunch to really shine and provide an effectively crushing tone that’s still filthy but clear. Given the 25-minute runtime, they also could have just sunk into ‘let’s play fast!’ mode, but the album is peppered with a few moments of more doom-y chugs for good measure. For every kick in the throat like “Tormentor,” there are a few seconds of slowburning fury in “Days of Dread” or the title track just to give you a moment to catch your breath.

While Trinity of Deception sticks to much of the usual formatting for the genre, it’s to the band’s credit that it’s such a fun experience. The energy oozes from each buzzsaw riff and it effectively switches up tempos to ensure that the enjoyment never fades. Easily worth looking into if you are a fan of this sort of material.