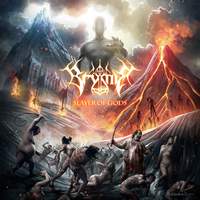 Brymir released Breathe Fire to the Sun back in 2011 and then seemed to go dormant for the longest time. Five years is a notable absence, but rumblings of a new album started to surface on Facebook and now we are hearing the band’s second effort, Slayer of Gods. Where Breathe Fire to the Sun was good (if not a tad predictable), Slayer of Gods ups the ante in all the right ways.

Symphonic melodic death metal is a phrase that still pleases a good portion of the staff here at DR, particularly when it’s done well, and that’s exactly what Brymir do on their latest. There’s a technical aspect to the music that comes out, like on “Nephilim,” where there’s an almost Mors Principium Est feel to the riffing, and it’s an effective way to ramp up the energy level, all while the synth does it’s part to make things sound epic and layered. The shredding is palpable and the often galloping melodies are one of the strongest aspects of the album. The other strength would be the synths themselves. They are heavily present, yet never feel cliché or over-the-top. Bombastic, sure (see the title track)…but the balance with the equally upfront guitar melodies keep them from overstepping their boundaries. The grandeur of “The Rain” comes equally from the aggression of the riffs and the sweeping beauty of the symphonic elements.

If you are looking for some symphonic melodic death metal that leans just as heavy on the guitars, Slayer of Gods will get your blood boiling (in a good way). They have brought themselves up to the next level in terms of their playing with the extended time away, and one can only hope that the wait isn’t so long for a third album. Powerful yet classy. 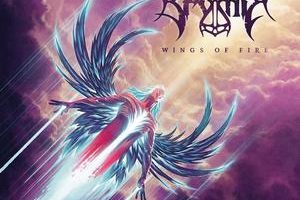