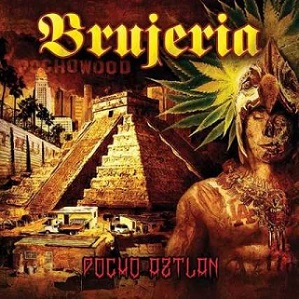 Brujeria’s every-other-year single release schedule has kept the band active, but they’re hardly front and center in the extreme metal discussion. Best known as a fictitious gang of Mexican drug lords portrayed by an assortment of prominent metal musicians, Brujeria’s appearance and reputation often outweighs their musical output. And certainly their recent “Viva Presidente Trump” single upholds that sentiment. Sixteen years removed from their last proper album, Brujerizmo (which was released on Roadrunner, showing how much things have changed), vocalist/ringleader Juan Brujo and gang are back with the bruising Pocho Aztlan, their first for Nuclear Blast.

Yet the album’s reliance on base-level death metal and the manic vocals of Brujo prove Brujeria can still hold its own across an entire album. The tongue-in-cheek element of the band rears its head on “Ángel de la frontera,” where the sounds of an email inbox and text message delivery are wedged between flat-out heavy, genre-free riffing. A sure-fire shout-along is found on “México campeón,” while the band’s cover of Dead Kennedys’ “California Uber Alles” is re-branded as “California über Aztlan.”

The novelty versus substance balancing act with Brujeria may be tough ship to sail for some, but Pocho Aztlan lines up nicely with the band’s ‘90s output. With all of the hub-bub over border walls, immigration, and deportation, Brujeria couldn’t have timed the release of Pocho Aztlan any better.