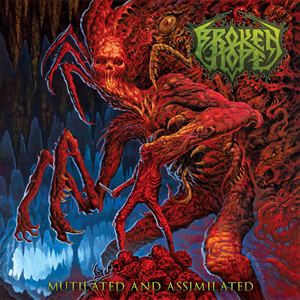 Despite it being almost thirty years since the band’s inception, Broken Hope has somehow never really gotten the prestige nor acclaim of their veteran peers (Cannibal Corpse, Deicide, Obituary). Seemingly relegated to the second tier, the band did return after a decade-long hiatus in 2012 and deliver an excellent comeback in Omen of Disease the following year, turning some heads in the process. Now with guitarist Jeremy Wagner as the sole founding member, this time the band was faced with the inevitable question of, “What do you do after a comeback record?”

In the case of Mutilated and Assimilated, you do what has always worked for the band throughout the various points of their career and bring them together in such a way that it feels fresh, and perhaps even more inspiring than they originally did. In keeping with the short sonic blasts of Omen of Disease and flirtations with the band’s earlier goregrind-ish origins (Swamped in Gore/The Bowels of Repugnance – check the “Swamped in Gorehog” medley as some clear evidence to refer to with the other tracks), there’s plenty of energy to be found in the spry 2-3 minute song lengths. The riffs really pop and work on a balance of thick grooves, near-doomy crawls, and of course, some bursts of speed. Mike Miczek gives a thrilling drum performance by keeping it varied (read: not just blastbeats start to finish) and vocally, while no one can truly replace gurgler Joe Ptacek, Damian Leski hits the same style with plenty of finesse and ferocity.

The riffing effectively melds the early approach of Broken Hope with their more technical side (a la Loathing) but never takes it too far. The tech flavors are held in check in reverence to the overall song flow, as the opening “The Meek Shall Inherit Shit” quickly points out with a spiraling melody that is as intricate as it is catchy. Speed runs in “The Carrion Eaters” lead into slower and more churning riffage in a natural progression until a massive, doomy feeling settles in the middle of the track. More frantic turns in songs like “Outback Incest Clan” and “Russian Sleep Experiment” maintain a sense of urgency because they do shift into varied tempos and keep you on your toes without becoming a jarring mess. The usage and blurring of melody, intricacy, and groove is the work of some master craftsmanship indeed.

Perhaps it’s time that Broken Hope get their due, and Mutilated and Assimilated should be just the album to do it. Sure, it’s death metal through and through and completely pure in that sense. But you’d be hard-pressed to find a band that can handle it with such tact and skill than you’ll find on this album.