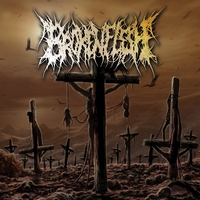 Christian death metal is something that metal fans often joke about or ponder the legitimacy of such. After all, the feral nature of the genre (as well as its lyrical inspirations) often do not lean easily in such a way. There have been some notable exceptions to the rule, such as Living Sacrifice and Crimson Moonlight, but much of the Christian death metal movement seems to lack a certain “something.” Broken Flesh, on their self-titled third album, fall somewhere in between.

There’s no doubting the visceral power that Broken Flesh brings to the table. Opener “Valley of Mass Crucifixion” immediately jars the listener with a combination of vicious blast beats, super low growls, and heavy/groovy riffs. On a blind listen, no one is going to say that this band is any less deserving due to their beliefs (let’s face it, the “Satan” thing is just as silly). This is some severely brutal stuff. If only Broken Flesh could maintain the level of intensity without resorting to more ‘modern’ means. Much of the beginning of the album is bound to make fans of Broken Hope or Cannibal Corpse pretty happy. But as the disc moves on, it begins to seem more like Whitechapel than Cannibal Corpse. The modern (read deathcore) chugs start to feel a bit stale, and the soloing that is present (see “Exalt”) can be effective but isn’t used as often as it should be on an album like this.

Broken Flesh does seem to have all of the makings of delivering a flat-out monstrous death metal release. But to do so, they need to strip themselves of some of the more modern touches and really go all in on the brutality. Until that happens, this is about as faceless as any other death metal act trying to gain a foothold in the scene.