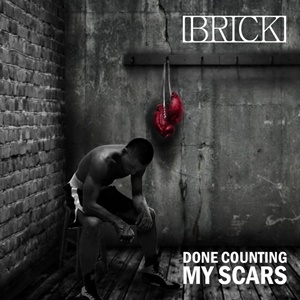 Scandinavia has a plethora of amazing musicians and metal bands – especially over the past four decades. Add Swedish sextet Brick as another act to keep an eye on. Done Counting My Scars is their second full-length – a ten track effort that has an interesting sonic blend of traditional heavy metal with blues-based groove hooks that come from different angles. Throughout the record these gentlemen carry varied influences and siphon things into quite an aural swirl cocktail that will have most swinging or singing along rather quickly as these tunes seep easily into your cranium.

Often you’ll hear a mix of organ-infused keyboard movements from Gustav Widerquist that keep things in a groove for guitarists Matte Lilja and Fredrik Finnander to playfully build upon. Imagine the hair windmills to the mid-tempo riff churn for “Shy of Seventeen” or the mighty Corrosion of Conformity meets Iron Maiden-like gallop to “Beloved Congregation” as two standout arrangements that just bring smiles wide open through successive playbacks. Cyber-like ivory action swirls against some crunchy main guitars for “Lifes Like” – which brings about a bit of their arena hard rock affinity, while “Taking Turns” digs a bit deeper into some heavier domestic terrain like At the Gates or The Haunted musically. Vocalist Johan Hultgren is the difference (and distinction) maker for Brick because of his magnificent phrasing and multi-octave power barrel register. Many times across the record this scribe thought of a blend of Glenn Danzig, Ralf of Mustasch, and a bit of that Sabbath-mystique when hearing his work in the opening title track and dramatic piano-laden ballad “One Less Day”. Add in a tight rhythm section that can go from slamming metal to pocket grooves in an instant and it’s easy to be swept away by the commercial-oriented melodies, hooks, and choruses.

Brick would be one of those bands that either in a festival setting or a sweaty, small club venue would get more alcohol sales going, heads bobbing, and merchandise scoop ups with no problem. It might not necessarily be overtly original, but Done Counting My Scars excels on delivering the tunes with power and precision, leaving you wanting even more.