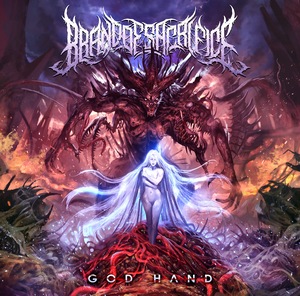 One could probably make the argument that a brutal death metal band is a bit more fitting of a venue for making songs about the Berserk manga than say, Battle Beast or Beast in Black, given its violent and bleak tone. Brand of Sacrifice (formed from the ashes of After Image) fits the bill here, with a focus on deathcore pummeling and some intensive electronic components added into the mix. Unfortunately, it doesn’t retain as much memorability as it could have.

First things first, Brand of Sacrifice have a sound that is undoubtedly going to be ‘all the rage’ with the younger metal crowd. Their sound is absolutely massive in tone, to the point of overwhelming (in a good way) when it comes to chugging riffs (see “Divinity”) and Kyle Anderson’s intense vocal performance, which goes all over the place in the extreme spectrum. The album is a visceral beatdown, and the electronics (think The Browning gone hyper-brutal) do give them added potency when they couple them together like in the album’s clear highlight “Fortress.” The problem, as it is with many bands like this, is that the cards are laid out on the table early and you can guess where the rest of it is going to go, even at only 26-minutes in length. God Hand is quite front-loaded as well, with much of it’s second half not adding to the release so much as just going through more of the same, which is a big problem considering that it’s so short to begin with. Add to it three interludes in this timespan (“Begin,” “Hill of Swords,” and “After Image”), which bring the listener out of the ‘pulverize’ mindset, and it hinders it further.

There’s actually quite a bit of potential present in God Hand, but it appears much of Brand of Sacrifice’s power is still in its infancy. It slams hard, and the electronics work to the band’s advantage – they just need to figure out how to find the right line in balancing songwriting that feels interesting and unique with keeping the caustic level of energy going full-tilt.