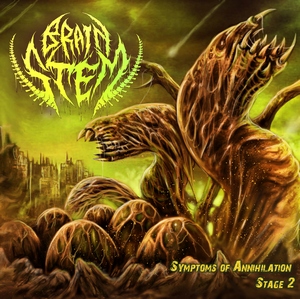 The sound of Canada’s Brain Stem might not be the first thing that you think of in terms of death metal. While the country may be known for the more techy stuff, Brain Stem own much of their sound to their neighbors to the south – grabbing from the ‘90s US scene (notably Florida). This is their second EP (bet you can’t guess what the first one is called), and offers a comfortable reminder of what makes this particular style enjoyable.

With only four tracks, it’s not going to outstay its welcome and allows the band to keep their priorities in check. Thus, the biggest push the band has for is in the brutality department. There’s frequent blasting and the tempo is fast but never reaches into absurd rates. It feels more balanced in the end, which is to the band’s advantage, and they also put in their fair share of grooves to accomplish this. Closer “Dawn of Rot” actually maintains a mid-tempo pacing for much of its runtime, but isn’t afraid to pull out some explosive segments to keep the energy levels up. The riffs work, and despite the aggression level, they are usually pretty catchy and manage to draw you in. The only real thing that is a knock against the band is how familiar the overall formula feels. It’s almost impossible to listen to without namechecking at least a few bands from the ‘90s Floridian scene.

Despite a familiar sound that will inevitably draw some band comparisons, Brain Stem deliver death metal that is straight-forward and to the point. There’s no added dressing to weigh it down, and in the end it’s a satisfying little EP that showcases brutal material with just the right amount of melody and groove to hold things in place.