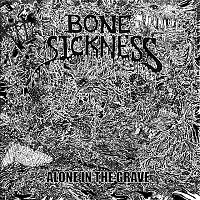 Dyed-in-the-wool, old-school death metal bands like Bone Sickness have always given Dead Rhetoric reason to ponder their thoughts on the current state of death metal. You know, bands with really clean production jobs, lots of arpeggio runs, utter lack of spikes, gauntlets, black clothing and so forth…this stuff probably makes Bone Sickness angry…to the bone. Had to throw that one in there. Regardless of anyone’s position on death metal (we’ll straddle the line), the band’s Alone in the Grave debut doesn’t have an idea beyond 1991. Just the way the band wanted it.

In contrast to some of their fellow retro contemporaries, Bone Sickness (who are from Olympia, Washington – we thought Tampa at first) don’t have the dying need to play off of Stockholm. Rather, they’re somewhere between the ultra sloppy fashions of Autospy and Repulsion. And since technicality is a total afterthought, it gives jams like “Submit to Decay,” “Scraping the Bones” and “Tied to the Stake” the “fun” factor, but not much else.

What may sound good in an early 90’s context doesn’t always mean it’s going to excite people today. Vintage death metal’s nostalgia factor is starting to wane (it was last year, actually), so throw Bone Sickness into the pile and move along.