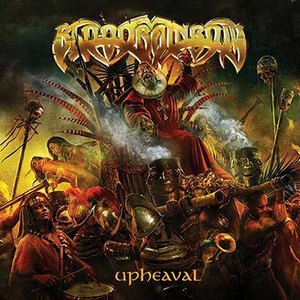 A band trying to merge Floridian death metal brutality with Scandinavian melody, Hungary’s Bloodrainbow have a more unique take than you might initially think. That also might be due to the fact that they use saxophone and trumpet to help enhance their sonic assault. Bloodrainbow triumph in that they fully use the instruments without coming across as gimmicky on Upheaval.

Coming across more in melodic death/folk metal terms than anything else, Bloodrainbow aren’t without their more brutal moments at times. The most brutal piece to the band is the vocals, which can come across as straight-ahead death metal. They may not occasionally mesh with the feel of the music but they certainly keep it visceral. There’s a lot of progressive material and even classic, Iron Maiden-inspired leadwork that keeps you engaged, such as “Stalingrad,” where blazing metal riffage shares some space with jazzy saxophone excursions and a ‘fiesta vibe’ at times. The ‘throw it all together and see how it works’ method does seem to suit the band best, particularly on the longer songs where they can attempt more, and other cuts like “Rolling Sand of Alam Halfa” and “Indestructible Armor” take the progressive leadwork and brass flourishes, not to mention the rumbling bass, and turn them into solid working anthems. The only complaint is that the first few tracks just don’t have the same charisma that the album seems to leap forward with starting with “Harpoon and Sonar.”

Kudos to Bloodrainbow for taking a number of elements that shouldn’t work well together in death metal and creating a unifying force with them. It may not be for all in the end (due to the extra instrumentation, but they’ve come across a formula that is their own to build upon.