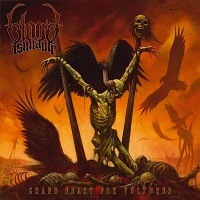 Slayer here, Slayer there, Slayer everywhere. Grand Feast For Vultures, the second offering from Norway’s Blood Tsunami takes more than a fair share of cues from Araya, King, and co. and it’s less engaging as it is annoying. There’s some minor riff-thievery going down from all eras of Slayer and it curtails what the band built on its steady, solid Thrash Metal debut in 2007.

The fact that Faust (ex-Emperor, jailbird, murderer, etc.) mans the drums is now strictly an afterthought. His playing is simple and rudimentary, relying heavily on the D-beat and not much else. It fits, though, as Blood Tsunami’s straight-forward thrash attack is culled right from the latter-80’s, drinking from the same fountain as Kreator and Zetro-era Exodus.

Choice, bristling riffs highlight the opening strands of “Personal Exorcism” and “Laid to Waste,” in spite of the occasional Slayer noodling. Only when the lengthy instrumental “Eceladus Rising” does the band really branch out, employing expansive twin-guitar melodies (read: lots of Maiden, some Wolf for good measure) and climatic runs that if used in other areas outside of instrumental territory, might widen Blood Tsunami’s span.

Since we’re still in the thick of the retro-thrash boom, Blood Tsunami should be afforded the chance to continue to ride that wave (ugh, terrible pun), butGrand Feast For Vultures doesn’t rage like a Merciless Death or ooze exuberance like Warbringer. Rather… it’s more revisionist than retro-thrash should allow itself to be. It’s not all Slayer worship, though – the ending of “One Step Closer to the Grave” is a total homage to Metallica’s “Call of Kthulu.” Now, that’s a great instrumental.