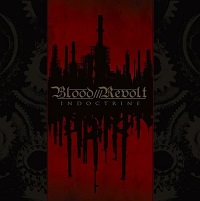 Best known for his totally unique wails, howls, pleas for order, love for nature, etc., Primordial’s Alan Nemtheanga Averill sounds every bit as tortured against the backdrop of sloppy, buzzing primal DM/BM as he does in his main act. Like so many of the longstanding members of the underground, there is this underbelly and sinister urge to re-create the glory days, which pretty much has to be the purpose of Blood Revolt and their debut, Indoctrine.

Paired with Axis of Advance’s J Ross and C Read, Blood Revolt revels in the coarse, free-for-all nature of early Bathory, Venom, et al. You can immediately ascertain where this one is headed right from the opening hum and rattle of “Salvation At the Barrel of a Gun,” as the trio make a spacious wall of noise that is blatantly unhinged and most likely, unrehearsed. It is that spirit and nature that is both a blessing and a curse for Indoctrine, as on occasion, the disregard for time and tightness ends up curtailing otherwise promising songs like “Bite the Hand, Purge the Flesh.”

Averill (like he does on every Primordial album) proves to be the center of attention, as his spirited clean vocals on more than a few occasions, serve as the real selling point here. Instead of wailing against mournful riffs, Averill gets his kicks out (see the glorious “No Name In Blood Across the Sky”) against ugly, gnashing guitar work that when combined with his clean vocals and discernable growls, is easily the best thing about Blood Revolt.

It’s almost a prerequisite that a noted and reputable member of the underground pops out a band/project like this. They’re becoming quite the standard operating procedure, and while Blood Revolt is no Bloodbath or Barren Earth (yeah, obviously we’re picking two bands at the opposite end of the spectrum), BR does have Averill, who could probably sing over the shittiest music possible and still make it sound compelling.