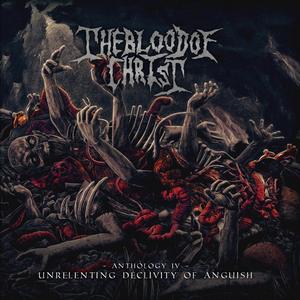 If you go back far enough into the annals of Canadian death metal, you’ll head back to the time when Cryptopsy and Kataklysm were beginning their ascension to the top in the ‘90s. You’ll also get a glimpse of Blood of Christ, who starting making their way through the pack at a similar point. But after being put on ice in 2006, the momentum was lost until the band came back together a few years ago. Unrelenting Declivity of Anguish is their first release since that point, serving as their fourth anthology.

Blood of Christ’s stongest suit is their ability to mash so much of the extreme death metal scene together in an unwavering and brutal display. Pummeling death metal grooves (throwing back to the ‘90s scene one might add) are immediate ear-catchers with instant headbanging intent, like in “Dragooned by Jupiter,” but they can also go in more obtuse and doomy directions, melodic wanderings (with occasional synths/atmosphere), or more chaotic (and undeniably Canadian/Cryptopsy-esque) fury and reckless abandon. It gives Blood of Christ a lot of ammo to work with, and they do their best to make each track into an unpredictable burst of energy. The way that the longer tracks, like “The Cursed” slither and morph build from rumbling doom to frantic speed is worth reveling in (not to mention some solid, stomping grooves). It’s just the type of thing that is needed to fuel a track of this length, and something the band has no problems executing throughout.

Able to bring about varied atmospheres and textures into an otherwise assaulting formula, Blood of Christ seem on top of their game after the lengthy absence. They can still reach back into the past, but they aren’t afraid to embrace the change that has occurred within the genre since their last effort. All of which make Unrelenting Declivity of Anguish an enjoyable slab of death metal.