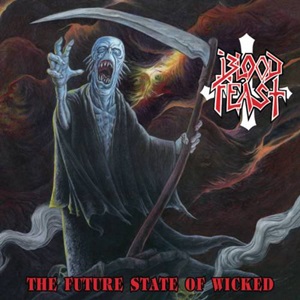 Roaming the East Coast with a potent thrash attack, many of this scribe’s high school alums got into Blood Feast on name alone – Kill for Pleasure as intoxicating an album title as Kill ‘Em All. Together in their first go around until 1991, they released two albums plus one EP – gathering a cult following for sure through smaller deals on New Renaissance and Colossal when other thrash bands launched themselves upward for the proverbial major label prize. Reforming in 2007, only guitarist Adam Tranquilli returns from those days (ex-drummer Kevin Kuzma finished in 2014) – but it hasn’t stopped the current quintet incarnation from playing shows and assembling material for their third proper full-length.

The Future State of Wicked picks up as if Blood Feast never abandoned their speedy, raw, and abrasive days of the 80’s – many in fact considered the band as developing tendencies that could put them as much in the early death camp as they were a thrash group. Especially when you take in the sandpaper-ish screams and low sporadic growls from Chris Natalini – the man has a John Tardy presence about him, along with keeping the rapid firepower caustic element thrash mavens clamor for. Intertwining twin spider web licks and evil trilling amid the normal mid-tempo to slightly speedier riffing gives “Last Rites” and “Off with Their Heads” instant neck whipping appeal, as Adam and fellow guitarist CJ Scioscia maintain energy and versatility throughout as seasoned veterans of the genre. Keeping the production and tones primitive pushes the impact of this material as well – the ten songs shifting between full-on sonic assaults such as “INRI” and the 86 second instrumental “Remnants II” to longer arrangements that showcase musical intricacies and melodic hooks without pandering to commercial aspirations (“The Underling” epitomizing that delicate balance).

More veteran thrash bands should take a page out of The Future State of Wicked as its creatively satisfying and aurally on point, adhering to the staples that made underground thrash near and dear to the tape trading, flyer passing, print fanzine market in the first place. Kill and kill again, indeed.