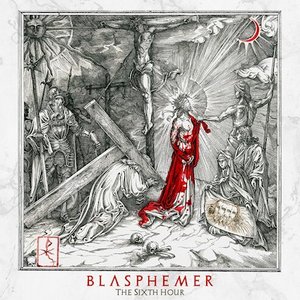 You can usually count on death metal of the Italian variety to give you a good knock in the teeth. Blasphemer is an act that has been a part of the scene for quite some time (1998 to be specific), even if The Sixth Hour is their third effort. Coming off of two releases on Comatose Music, their first release for Candlelight Records is a somewhat blackened and wholly brutal effort that delivers everything you’d expect.

With subtlety more or less thrown out the window in favor of frantic riffs and blastbeats a-plenty, it’s quite clear what Blasphemer’s endgame is. With lyrical content that would make Deicide proud, this sticks to the above formatting as well. But with all of this out in the open – it works. The only moment you will have for a breather is a short acoustic piece (“Blessed are the Wombs that Never Bore”), but besides that, it’s a nonstop extreme metal thrill ride. Buzzing guitars swing in that visceral way that offers enough variation to keep you intrigued from track to track, but never goes for the ‘beat you in the head’ with technicality that seems to be today’s norm. It’s a pleasant change-up, and allows them to keep brutality at the forefront of each track. While the tempo may vary, from showing a tad bit of restraint and slowing down (“Via Dolorosa”) to dizzying flurries (“The Stumbling Block”), it maintains a dark and heavy presence – there’s nothing modern and sterile to be found within.

The Sixth Hour is blazing with speed and biting aggression, the type of thing that should make anyone lean an ear in their direction. Some slight moments of melody never get in the way of their main, assaulting thrust but help to ensure that it’ll get some extra attention. Solid through and through.