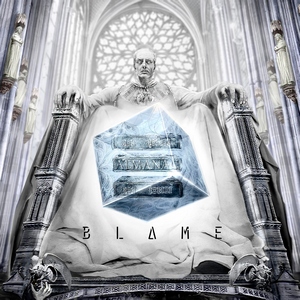 Perhaps due to sheer volume, or the need to perpetually raise the bar when it comes to brutality, it seems there aren’t quite as many albums in extreme metal that jump out and grab the listener by the throat. But that’s precisely the feeling that Blame delivers on their second offering with Almanac. At less than 20 minutes, it’s an incessantly feral rush that will leave you craving more.

While there’s no doubt that Blame can do the ‘tech death’ thing as well as some of the bigger names in the genre, it’s been some time since a release of this nature has felt so venomous. Blame’s strongest feature is how incredibly aggressive they can stay while playing at blistering tempos. It truly feels like a wall of sound is engulfing you as you rip into “War,” and that feeling perpetuates itself until the closing moments of “Victory.” Sure, there’s some occasional groove (“Chalice”) or progressive moments (the title track), and they are to be appreciated in making things feel even more epic, but that steamroller sense of complete brutality is pleasingly overwhelming when they kick it into high gear – accentuated no doubt due to Geoge Kollias’ (Nile) frantic footwork. With seven songs in the 20-minute time frame, these are precise, to the point helpings of carnage, and due to the intricacies of the riffing and basswork, feel far more memorable than they have any right to be. But as thundering cuts like “Eternity” rumble forward with frenetic energy, they sprinkle in some progressive leanings, fire off a ripper of a solo, and exit – there’s plenty to say in 2-minutes but it never feels cramped for space.

An utter wrecking ball of an album, Almanac delivers pure energy. While it’s fiendishly abrasive, Blame stay their hand by infusing an element of control within the chaos. Technically pleasing, subtly melodic, and altogether frenzied, it’s a glorious combination that’s sure to impress.