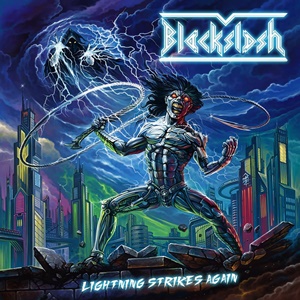 Playing the music ‘your parents used to listen to’, German act Blackslash live for old-school heavy metal ethics on this third studio album Lightning Strikes Again. You know the type – NWOBHM influences firmly at the heart and soul of their songwriting, when bands like Iron Maiden and mid-70’s Thin Lizzy made headway on guitarists, bassists, drummers, and singers all around Earth. The quintet has been around since 2007, unapologetic for their outlook and stance – and this record gives listeners ten more tracks of tight riffing, addictive and forceful hooks, plus a vocal harmony penchant that will aid the cause for headbanging retention.

The pumping bass work of Alec Trojan plays as important a role as the dual rhythms and spotlight harmony licks from Christian Haas and Daniel Hölderle that pop in and out of most tracks, as “Eyes of a Stranger” features that unison musical/vocal aspect to drive home a killer composition. At other times the pacing gets into a semi-gallop, while the alluring vocal harmonies take things into Sweet/Queen territory during another Maiden-esque favorite “Illuminate the Night”. Dynamic in the bluesy clean opening and emotional vocal delivery for the epic-oriented “Save My Heart”, the band’s ability to know the proper riffs, pacing, and transitions squeeze out the best passages for unison audience participation or syncopated stage moves for the musicians. A difference maker for Blackslash is the natural upper register of singer Clemens Haas – cut from that older cloth, he would not be considered so much a Halford/Dickinson clone, but in line with progressive rock/AOR style crooners.

It’s hard to single out specific favorites, as they consistently change as more playbacks occur. But the fun, playful main lick for the Thin Lizzy-oriented “Night City Street Lights” gets this scribe’s blood pumping and fists high in the sky, while “Unknown Heroes” showcases their classic doom/semi-ballad side to prove their knowledge of the genre and appropriate dynamic diversity. Lightning Strikes Again favors that fathers to grandfathers of metal generation style – but hopefully some younger people also dig into this, as it’s high quality traditional metal for certain.