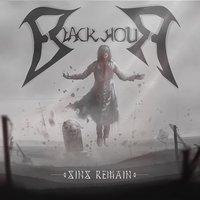 With the band’s geography being a bit of a talking point (it’s not every day that you find a heavy metal band from Pakistan), let’s toss that all aside and just take a look at what these guys have done with their second album, Sins Remain, without further referencing locale. This is dyed-in-the-wool heavy metal that should make many fans smile.

Blackhour’s brand of heavy metal doesn’t fit into one particular mold, which makes it a bit more exciting than a lot of what comes from the genre. There’s nods to the old guard of course, with “Wind of Change” taking the Maiden-esque gallop out for a fun spin and “Life Brings Death, Love Brings Misery” having a bit of older Metallica flair in its more quiet moments, and there’s even some of the cold, melodicism of later-day Sentenced in “Losing Life.” But Blackhour shys away from mere imitation and tosses some other bits into the mix. For one, there’s a modern edge to the material to couple with the vintage flair, giving tracks like “Battle Cry” a little extra oomph. But they also play around with some more classic rock influences as well when the moment calls for it, which keeps the lengthier tracks more playful and dynamic. Then there’s the harmonized leads and dazzling solos, which are the icing on the cake. The leads and catchy riffs are some of the most “fun” in recent memory. Thoroughly addictive and memorable. Lastly, vocalist Tayyab Rehman gives a diverse performance, resonating some emotion while able to hit some high notes and keep some power in his voice.

A solid sophomore attempt by Blackhour. There may be some raised interest due to the band’s geography, but you’ll stick around for the memorable hooks and melodic leadwork. Sins Remain is one under-the-radar piece of heavy metal you’ll want to seek out.