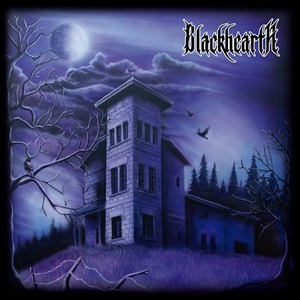 A multi-faceted heavy metal project from Spain, Blackhearth contains six members and on their self-titled debut album combines interests in ambient and progressive textures with conventional traditional metal benchmarks throughout these seven tracks. An alluring combination if pulled off convincingly – but there is also a slight danger in trying to throw too much into the veritable sonic stew that things come off disjointed. And as it currently stands after numerous passes to these ears, this self-titled album showcases a set of musicians with talent but struggling to squeeze out all the best working elements to streamline an effective consistency for their platform.

The disjointed main melodies from vocalist Alain Concepción probably are the biggest offender in keeping listener interest. Because of the progressive nature at times to the musical foundation of songs like “Tarker’s Mills” and “Earls of Darkness”, he squeezes in his words in a haphazard, scattered fashion – using a forced semi-high pitched warble that against his naturally stronger mid-range sounds a little out of place to uncomfortable depending on the passage you are taking in. The use of acoustic/ clean guitars and keyboards gives Blackhearth that extra ambient edge – almost like 90’s Tiamat in places for “The Magician” or Dream Theater/The Gathering-like for the beginning sequences of “Flying Away”, setting up anticipation for the headbanging hooks and solid groove action that springs forth. There are plenty of musically adventurous breaks from keyboardist Julio Veiga plus guitarists Alex Hernández and Endika Ortega that elevate their normally straightforward work with a bit of neoclassical/intricate intensity. The darker atmosphere opens up dynamic possibilities as well – most evident on the almost seven-minute “The Truth You’ve Missed”, the gothic-style keyboards against some King Diamond/Voivod-like riffs delivering quite a dual level arrangement.

Blackhearth’s self-titled debut is a case of potential slightly unfulfilled, which can hopefully be smoothed out through a more critical approach to getting the vocal performance to match the versatility these musicians offer. One to possibly keep an eye on further when the second recording hits the streets.