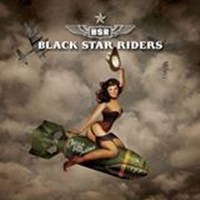 Establishing oneself based on past revered acts is always a touchy subject in the hard rock/metal world. One always hopes that people would give everything new a fair shot – but more often than not, nothing quite makes it up to ‘classic’ status like the old faithful pinnacle songs or favorite release. Black Star Riders features notable Thin Lizzy guitarist Scott Gorham and The Almighty vocalist/guitarist Ricky Warwick amongst its lineup, hitting the scene favorably with their 2013 All Hell Breaks Loose debut – and hoping that lightning can strike twice for The Killer Instinct before a massacre mows down the emerald warrior.

Ripping out a triple six-string attack (Damon Johnson the third party) right out of the gate for the opening bars of the title cut, the warm harmonies would make the late Phil Lynott proud, and Ricky’s bluesy note melodies the proper compliment to this catchy number. Those who love a lot of those cultural textures in their music will positively gush over the Native American elements throughout the mid-tempo “Turn in Your Arms”, while the 7 minute closer “You Little Liar” rules because of extended instrumental openness especially during the last third of the song, the type of heroic leads that make heads turn and young ones pick up the instrument like a solider preparing for battle.

Those of you who love a lot of that Irish guitar parts and pub-like background gang vocals, “Soldierstown” will be your anthem to champion in future Black Star Riders set lists. A lot of the instrumental breaks are similar to the Thin Lizzy work in “Emerald”, one of many songs that inspired Iron Maiden and the NWOBHM brigade. Keeping the sonic outlook lean and mean, “The Killer Instinct” serves up the adequate mix of licks and hooks necessary to drive these songs into the brain very easily – and the rhythm section includes veteran bassist Robbie Crane and ex-Megadeth drummer Jimmy DeGrasso that know how to emphasize the impact parts.

Phil would be proud of Black Star Riders for sure – the boys are definitely back in town for good! 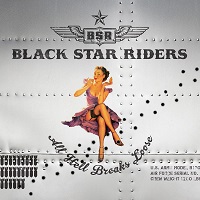