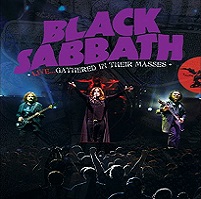 Sabbath, unfortunately, is crawling to the finish line, broken down, splintered, and with a new album that hasn’t floated too well with the real metal hard-asses. Their 2013 round of touring has been without incident, save for Geezer’s comments that he can’t foresee the band doing such runs for much longer, meaning that we should read the tea leaves and perhaps enjoy this one, final global go-round. Since shelling out a pretty penny to see the Birmingham boys at this stage isn’t financially prudent, take hold of the Live…Gathered In Their Masses DVD, a recording of an April 2013 gig in Melbourne, Australia.

Outside of a sprinkling of four cuts from 13 (four in all), the setlist is largely the same it was since the band has been on their reunion run since 1997. Some of these songs are rightful pillars of metal (i.e. “Iron Man,” “War Pigs,” and the monstrously underrated “Snowblind”), but they’re painstakingly performed by Ozzy, who on a cut like “Into the Void,” mumbles through the whole darn thing, eyes fixated on the teleprompter. Sheesh. Geezer still gets down all nimbly on “N.I.B.” (his finest moment), while Iommi stalks the stage in his preferred understated manner.

The new cuts get by; “Loner” being a composite of a handful of previous Sabbath tracks, “End of the Beginning” full of silly lyrics, while “God is Dead?” being the only with a real get-up to it on the doom side. So in all, Live…Gathered in Their Masses was probably intended to back in, supplement the new record (extras are slim to nil), show that the old fellas can still pull it off live, which they can, but line ‘em up next to Maiden and it’s not even close.