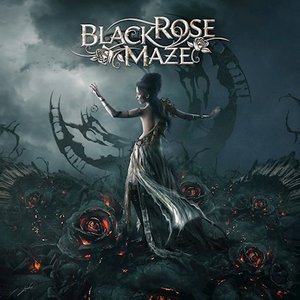 The project of Rosa Laricchiuta, Black Rose Maze is a new hard rock entry that effectively channels some bits of ‘80s rock into a modern formula that feels instantly gratifying, yet holds up upon repeated listens. Given her start on La Voix (Quebec’s version of The Voice) and her tenure in the Trans-Siberian Orchestra, Black Rose Maze provides the concrete evidence that she is ready to make quite a name for herself.

What makes Black Rose Maze work so well is that combination of classic rock elements into a heavier and more modern vibes. In no way is this reaching metallic waters, but it nestles quite well into the hard rock circles, but has an edge in that there’s an almost timeless feeling to the melodies that accompany each of the tracks. Laricchiuta’s vocals are the clear centerpiece to the album, and she proves herself worthy of carrying the act. There’s just the right level of rock attitude and plenty of energy that is flowing through, with only the finale (“Call Me Now”) being the only track that goes anywhere near ballad territory – a tender moment that still showcases plenty of power behind it. That said, the opening combination of “In the Dark” and “Laws of Attraction” should be all that it takes to sell the listener on this new act. The former being a driving anthem on the harder side of the album with a catchy chorus that will quickly stick into your head, and the latter being a duet with Jeff Scott Soto that shows the two playing off each other quite well. Some other highlights include the slower but effectively built-up “Look at Me Now” and the groovy mid-tempo thunder of “Let Me Go.”

A welcome addition to the hard rock circuit, Black Rose Maze is an excellent introduction to Rosa Laricchiuta and her musical vision. Rare is the act that can bring in some clear older influences and inject them into a more modern package without hampering one of the two pieces of the puzzle. Something that makes Black Rose Maze worth an investigation for rock fans.