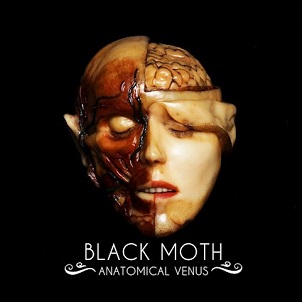 A bit puzzled as to why the Candlight/Spinefarm union has Black Moth over, say, the most obvious of labels, Lee Dorrian’s Rise Above Records. Hailing from Leeds, Black Moth play the sort of mojo’d Sabbath’d doom (‘d) that Dorrian’s own Cathedral rode to prominence over two decades ago. Save for the fact Black Moth has the fiery Harriet Hyde out front instead of a gruffer, and the two bands are ripe for comparison. Perhaps Dorrian saw too much of his own band in Black Moth, but nevertheless, the band’s Anatomical Venus full-length (their third overall) strikes the appropriate U.K. doom chord.

At times, Hyde will bust out some serious Dorrian-like cadences, like on opener “Istra” and the chorus of “Severed Grace,” which is a Cathedral dead-ringer. However, she’s far more of a natural singer than we’re giving her credit for, something reflected across her melody choices and chorus action on “Moonbow” and “Screen Queen,” the latter turning up as the album’s most rocked-out moment. And while Black Moth demonstrates the necessary amount of doom restraint on “Tourmaline,” it’s often their bottom-end and adventurous arrangements that push things across, like on the feedback-drenched “Pig Man.”

A lot works in Black Moth’s favor on Anatomical Venus, not the least of which is the fact it often moves around the now-dated psychedelic rock formula that is getting close to being on its last legs. Not so with Black Moth, who have the beefiness and doom might to engage all comers…possibly even Mr. Dorrian himself and his Cathedral brood.