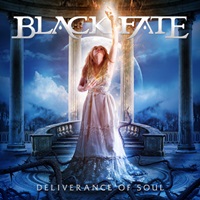 Fortunate to take in a lot of melodic, power, and progressive metal during the 1980’s and 1990’s through worldwide tape trading, this scribe discovered a potent scene in Greece at a time period when double bass, singing in key, and lead breaks were not cool stateside. Black Fate would be one of my discoveries through their self-titled and A Piece of Dream demos in 1992-93, then subsequently took the rest of the 1990’s off due to lineup shifts and military service duties. Since 2000 though they’ve released a steady stream of albums, demos, and singles – improving their profile enough that current label Ulterium saw fit to re-issue their third full-length Deliverance of Soul and give it a re-mastering/ new cover art makeover.

Immediately noticeable is the band’s musical chemistry to lock onto a hook or melody quickly and extend things into harmonies vocally that you can retain for weeks and months on end. Guitarists Ilias Tsintzilonis and Giannis Theologis have a driving sense to their rhythms, taking the best of Randy Rhoads and John Sykes firepower, and a hefty dose of the much missed Conception to make “If the Silence Was Grey” and “Dying Freedom” two immediate heavy hitters for stellar melodic metal – the latter including a cool flamenco-oriented acoustic break. Keyboardist Achilleas Mochloulis picks careful spots to layer orchestration for mood shifting – he can be uplifting as well as morose part to part, check out “Blood Red Sky” for the sonic asset he brings to Black Fate’s sound.

Where the band elevate themselves beyond mid-level to premiere outfit resides in the rich, vibrant pipes of vocalist Vasilis Georgiou (also the current singer for Sunburst). If Thomas Youngblood or Tore Østby ever needed a Roy Khan-oriented crooner, this would be the guy to deliver: emotionally captivating, multi-octave propensities and proper understanding of background harmonization to make choruses sing-a-long conducive. Check out the slower, mid-tempo anthem “Rain of Paradise” or the twin guitar harmony laced “Thorn in My Hand” for all facets of his power/ progressive oriented range, the stuff that makes listeners abuzz and other musicians beam with pride.

The Jan Yrlund cover re-design plus Erik Tordsson re-mastering beef up probably brings Deliverance of Soul a little closer to current times without sacrificing the melodic metal quality that should put this record in the hearts of all Conception, Kamelot, and even a few Iron Maiden fans. Mandatory for most followers of to the point, melodic-oriented anthems.