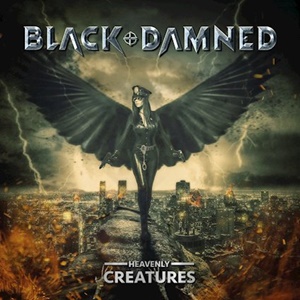 When it comes to traditional forms of heavy metal, Germany continues to be a shining beacon for domestic acts showcasing their talent. The debut record Heavenly Creatures from Black & Damned features twelve songs on CD, ten songs on vinyl that contains main trademarks of driving/epic bands like Black Sabbath, Helloween, Iron Maiden, and other offshoots as far as energetic riffs, keyboard/orchestral embellishment, and melodic, passionate melodies/hooks of varying tempo degrees. While shooting for the stars, the final results are mixed as at times the material doesn’t quite hold up to that veteran standard these gentlemen aspire to achieve.

Guitarist Michael Vetter and singer Roland Seidel as founders and main songwriters possess a keen sense of versatility, developing a mix of heavy metal tracks that run the gamut from anthem-oriented headbangers such as “Salvation” and “The World Bleed” to the emotionally engaging militant ballad “War Is Just Another Word for Hell” as well as injecting Irish bagpipes/folk textures to the start of the pounding “We Are Warriors”. Keyboard support from Axel Mackenrott (Masterplan) fleshes out main guitar hooks that keep “Liquid Suicide” and CD bonus track “Dreams to Stay Alive” very memorable, the latter containing some of Michael’s best, driving guitar work in that Dio-era Black Sabbath meets later 90’s Helloween platform. Additional Far Eastern elements to start “The Wardress” keep interest high, the longer instrumental sequence giving Roland a chance to dance playfully with the music when the verses and chorus hit. Black & Damned aren’t going to be the speediest or flashiest group when it comes to their performances – they have a knack for picking out the right three/four chord sequences and building out the arrangements through bluesy lead breaks and thoughtful transitions in tight 3:30-5:30 windows.

Where improvement needs to occur is in specific easy to mark choruses that get beaten into the proverbial ground (“Born Again” the biggest offender, although “Liquid Suicide” is a close second) and Roland’s range has that occasional German rasp or off kilter nature that can be charming for some and an irritant to others. Overall though potential is present, enough that Heavenly Creatures has that melodic heavy/Teutonic nature that many in metal treasure.