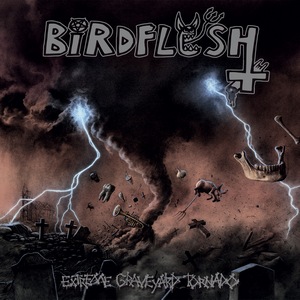 One of the more revered names in grind, it’s been a while since we’ve heard much from the Birdflesh camp. While they’ve been involved in a few recent splits, 2008’s The Farmer’s Wrath is the last release that the band can completely call their own. But if the perfectly fitting album title and some laugh out loud song titles (“Guacamolestation of the Tacorpse” is hands down the best title of the year) are to give a first impression, Birdflesh is back at full force.

Before one goes too far, understand that Birdflesh isn’t your simple, run of the mill grind act. While some songs hit those marks (“Are We Great Again,” or “Pub Night”), much of the album derives it’s fun from the shocking memorability that the songs display. Far from 1-minute blast fests, there’s enough punk attitude and humor tossed in along with some serious groovy bouts to make them stand out. Whether it’s a repeated line or melody (“Pyromaniacs”), balancing groove and throttling riffs (“Towards Insanity”), or offbeat humor (“Grind Band”), the tracks stick with you far longer than other bands of this type. Particularly when considering that you are getting 24 songs in a matter of 27 minutes. Diving further into the lyrics is well-worth it for those with a crass sense of humor (taking things well beyond just mere funny song titles), thought it’s not a mandate to enjoy the music.

Many often look towards grind as being lazy and noisy, but its bands like Birdflesh that keep the genre alive with their engaging and amusing approach. The music and hit you hard in the cerebrum as well as the funny bone, striking a tone that only masters can achieve. Extreme Graveyard Tornado may sound silly, but it’s an apt description of the musical destruction that the band brings with them.