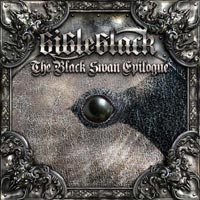 With Mercyful Fate on hold for what seems like an eternity (1999’s 9 needs to be followed-up in a serious way), its members continue to pop up in new bands

. No different than when guitarist Hank Shermann formed Force of Evil, fellow axe-man Mike Wead brings us the surprisingly visceral and thrash-oriented Bibleblack.

There’s this degree of symphonic, but really symphonic black metal to The Black Epilogue and it starts with singer

Kacper Rozanski. His Shagrath-light vocals are very pronounced and when coupled with the bristling, pristine production job, Bibleblack becomes less of trad power metal band and more of a streamlined thrash/black metal band, if that can assist in any way.

Bolstered by a snappy production job, The Black Swan Epilogue has its share

of attention-grabbing moments, most notably the well-orchestrated chorus of “Mourning Becomes Me,” the momentous riffing of album highlight “I Am Legion,” and the bone-rattling intro of “Bleed.”

In the end, thrash rules the roost on The Black Swan Epilogue, which again, is something of a surprise considering the parties involved. The only respite (and nod towards the obvious power metal spectrum) comes in the form of the occasional clean