Beyond Forgiveness – Live to Tell the Story (Sliptrick Records) 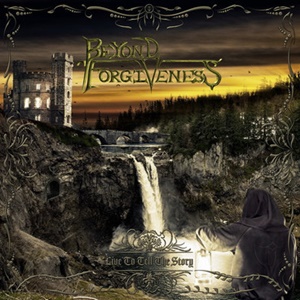 Symphonic/gothic metal has gained momentum stateside – European artists gaining headlining appeal, inspiring musicians to form their own bands and release product to creatively express their ideas in a tangible way. Beyond Forgiveness started originally in 2009 but reformed in 2014 with a focused quest to blend together their ideals of symphonic parts (lush orchestration, choirs, operatic vocals) with aggressive metal influences that include melodic death, doom, and power nuances. They’ve released an EP, demo, and full-length over those past five years – setting the stage for their second album Live to Tell the Story. This Colorado quintet possess a varied approach on both the music and vocal front – incorporating multiple members on the latter front both male and female of the clean and growl variety to set these ten tracks into dynamic diversity.

Much like you would expect from artists like Epica or Leaves’ Eyes, these musicians shape their melodies depending on the atmosphere they wish to convey track to track. When needing to be a little more bombastic against the aggression, you’ll hear male growls in tandem with Talia Hoit’s operatic siren voice – making the title track an early highlight. Later on, heads down power riffing of the Blind Guardian/Orden Ogan-kind takes “Labyrinth” on a roller coaster ride, the arrangement shifting with grandiose keyboard orchestration, persistent double kick mechanics, and supplementary growls once again serving as a beast to the beauty as the storyline unfurls. You feel a lot of epic doom nature to certain guitar parts and marching tempos as well, as if Manowar and Primordial factor a bit into the approach and fierce shifts during “One Last Time” which bristles with kinetic firepower as fists flail to the sky. Talia as a singer commands attention and doesn’t draw out her operatic abilities at the detriment of the individual songs and their inherent needs – her careful choices and restraint at times fuels the musical intensity as “When Rivers Turn Red” and the closing piano ballad “Forever Dream” illustrate.

Is everything perfect on this release? To these ears, the mix could have favored a bit more of a sustained drum sound (the snare is a bit distant) which can get washed out a bit from the orchestration/guitar activities – but that may have been more of a budget issue over anything else. Overall, Beyond Forgiveness have established some of their own take on the symphonic/gothic metal landscape by adding in their doom/death influences, veering into epic/power aspects when necessary, and as such Live to Tell the Story keeps your attention throughout it’s 54-minute running time.