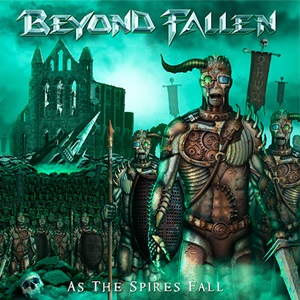 Intangible quality can be difficult to pinpoint in correct, easy to relate terms. Given decades of intense exposure to the genre of metal, you just feel in totality when bands elevate their game to high acclaim levels. Beyond Fallen from Wilkes-Barre, Pennsylvania is a five-piece outfit that for over 13 years has been a part of the straight ahead heavy metal movement – gaining accolades stateside and abroad for their discography as well as making numerous festival appearances at Headbanger’s Open Air (Germany), Warriors of Metal (Ohio), and Ragnarokkr (Illinois). As the Spires Fall, the band’s third-full length record, showcases veteran musicians well-equipped to deliver a potent charge of dynamic hooks, catchy riffs, and high octane vocal melodies that take a host of old-school influences and mold them into blistering anthems guaranteed for fist pumping excitement.

After the cultural-oriented “The Arrival” intro sets the album up in a Vicious Rumors/ Judas Priest triumphant moment of glory, the cascade of power riffs and guitar hooks plus speedy double bass action courtesy of drummer John Jesuele takes “Return of the Sky Gods” into early highlight mode – a majestic number that would appease any Helstar or Iced Earth follower. Varying the tempos and types of songs keeps Beyond Fallen on their toes – knowing when to ride the proper riff into the sunset while galloping away for accents on the title cut, or reaching back into Dio-era Sabbath for the epic nature of “Destroying Reality”. A little bit of Criss Oliva dark power chord nature comes out from guitarists Steve Jasuilewicz and Greg Baczmarga on another favorite “Seven Scorpions”, which can get a little thrashier during certain transitions but overall just has this deadly groove nature that has been much missed since the Hall of the Mountain King days of Savatage. Not to mention you’ll be privy to a boatload of ripping lead breaks throughout the record that in themselves could set the world on fire.

Vocalist Joseph Karavis has the perfect attitude, versatility and ability that puts him near the top of the classic/ traditional and power metal singers going in the business today. There’s not one specific singer that comes to mind when taking in the rhythmic churning “Razor Wire Halo” or aforementioned title track – he has this perfect blend of Matt Barlow’s commanding mid-range as well as Rob Halford’s piercing ease in the highest falsettos that when using harmony accompaniment sends chills down the body. Add in killer cover art with castles and cyber-oriented demonic warriors and a fantastic, robust production and you have the makings of a 45-minute effort that stands the test of time. Beyond Fallen proves high quality traditional metal with power and thrash nuances isn’t merely a thing of the past – there are current artists delivering the goods consistently today, and As the Spires Fall in a just marketplace would be a massive seller worldwide. 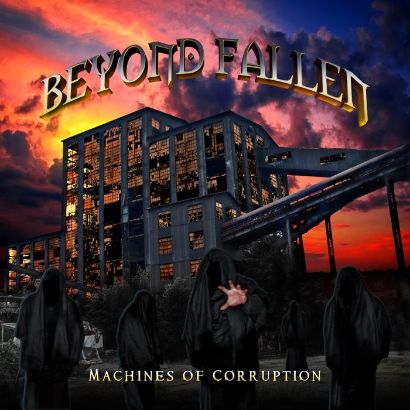