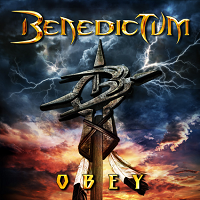 All this Chastain talk of late puts a band like Benedictum in more perspective. It’s the now standard strong female, big pipes, dominant personality, backed by a bunch of competent dudes with neo-classical knowledge, or straight metal chops. In the case of Benedictum, their forte has long been the no-frills, yet slightly stalwart leanings of brass ball’d metal. You know – meaty riffs, keep it mid-tempo, and herd up some leather-lunged chorus for the “true” metal punters. That’s been the band’s modus operandi for quite some time, and doesn’t change on their fourth album, Obey.

Nothing out of the ordinary when it comes to placing Freeman at the top rung, meaning, she’s the dominant one in the mix, designed to take relatively simple riffs and do something interesting vocally with them. She’s pretty over-the-top on “Fractured,” where an ample double-bass flow makes it a rather blatant choice to open the album. The dirty rally of “Fighting For My Life” is slick, with gang vocals coming in as a unified front, and the duet with former Black Sabbath singer “Cry” serves as the album’s reflective break, where the lighters come out, towel gets slapped on, and the drum riser is used as a rest. (Oh wait…this isn’t “Beth” by Kiss.) But really, Freeman does ballads pretty well too, her voice containing plenty of adrenal force and timbre.

Slide some of the clunky missteps out of the way (“Evil That We Do,” “Die to Love You”) and Obey is a fit jawbreaker, a step up from the tedious and predictable output from Doro, who outside of Leather Leone of Chastain, is one of the few contemporaries to Freeman we can rattle off the top of our heads. And having tracked Benedictum from their quiet early 00’s beginnings, it’s with albums like Obey (and their 2008 Seasons of Tragedy) that put into the play that they’re one of the better American/Euro female-fronted no-frills metal acts around. 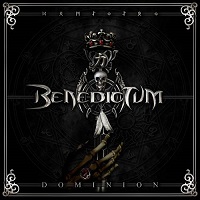