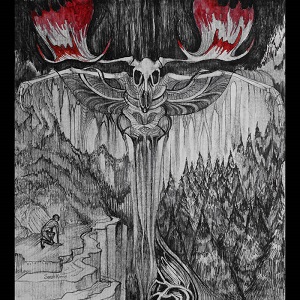 Witnessing Bellower’s debut performance in western MA years back, anticipation has been on high for the quintet’s debut offering. Consisting of musicians with ties to numerous outfits like Thunderforge, Vacant Eyes, Western Massacre and Krakatoa, this act specialize in an extreme black metal approach that has a hefty degree of melodic and harmonic qualities amidst its caustic, sledgehammer-like sonic punch. Legendary Bones as their first full-length establishes Bellower as a group willing to incorporate influences from North America and abroad, looking at the qualities that put early Scandinavian black metal on the map while injecting cultural themes from Celtic/Irish terrain in an alluring epic style.

The guitar work of Josh Moran and Louie Motamedi can be speedy and dramatic through one movement, and hauntingly exquisite the next. The tremolo fusion and twin epic runs making “Bear Heart Ritual” an early favorite, setting up the impending double kick/mid-tempo death tempo of Jeff Greene seamlessly, even the lead passages telling their own vivid story and not working against the mood/feel of the arrangement on hand. When the band wants to be a little more punk-filtered a la Motörhead in specific riffs, they push the dissonance angle while chugging along in almost a blackened/classic context for “Tessellated Skin” – the instrumental sections bristling a bit with progressive measures as vocalist Tom Peake summons screams and gritty bellows from dark chasms, casting cathartic shadows over the top of this juggernaut of sound. Seasoned veterans in other genres of metal, it’s evident that Bellower craft their own take on black metal – seeping deep into those sonic crevices from dynamic engagement, allowing the quieter, tranquil passages of favorite “Cairn of the Huntress” to gain much more impact when the raw rhythms and solid rhythm section pounding to churn together as primal as one could muster. Considering the six songs average an eight-minute and change time frame, you’ll gain just the right amount of aggression and fury to absorb before the next subsequent sonic swing occurs.

Remembering the early days of Darkthrone, Satyricon, and Emperor but also adding in some aspects of Primordial, Celtic Frost, and the aforementioned Motörhead, Legendary Bones gives off quite an exciting debut set of material to build upon – and should allow Bellower to gather followers not only in the New England scene, but across the globe.