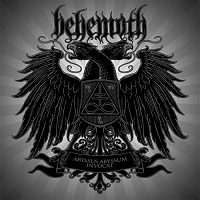 Stating the obvious, nothing can stop Behemoth. Not even a life-threatening disease, something that threatened the very existence of the band when mainman Nergal was stricken with Leukemia earlier this year. Now that Nergal is on the road to recovery, the band can resume touring for 2009’s heralded Evangelion, with the stop-gap Abyssus Abyssum Invocat doing some necessary clean-up from the band’s long-out-of-print EP’s.

Material is culled primarily from the Conjuration and Slaves Shall Serve EP’s, with some live material added to beef up the proceedings. Most of the songs here are familiar to the Behemoth faithful, including live renditions of “Christians To the Lions,” the triumphant (and totally killer) “Demigod,” and “As Above, So Below,” to name a few. The live recordings are relatively crisp, without any noticeable overdubs, giving the band’s furious material some weight in the live arena.

A cover of Nine Inch Nails’ “Wish” is a curious one, with Nergal singing in the same vein as Trent Reznor, which given how monolithic the man’s roar is, is quite the surprise. Venom’s “Welcome To Hell” gets a run-through, as does Danzig’s “Until You Call On the Dark,” both of which are fairly faithful to the original, with the latter benefitting from Nergal’s surprisingly versatile regular “singing.” Perhaps the man should do more of it in future albums.

Albums like Abyssus Abyssum Invocat are usually reserved for completists only, so given the band’s rising popularity (which may have even increased during Nergal’s illness), Metal Blade and Behemoth were wise to capitalize on the surplus of material at hand. The remainder of 2011 and 2012 will prove to be pivotal years for Behemoth, although you’d have to be a total fool to count Nergal and co. out. There’s just no stopping these guys.