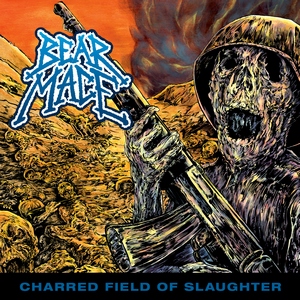 Death metal is as death metal does, sir. Chicago’s Bear Mace instantly bring up the old school death metal flag, with the cover art of their second full-length, Charred Field of Slaughter, and it’s full of warfare and straight-forward attacks that will be very reminiscent of Floridian waters. While the focus is very Death-heavy (as in the band), it’s still an enjoyable enough romp for fans of the old guard.

Yeah, there’s a lot of early Death-isms and some nods to Obituary in some slower sections (as well as some mid-tempo Bolt Thrower, but we’ll stop there) but as is usually the case in old school death metal, it’s more about the feelings that it conjures than the apparent influences. Bear Mace can bring the heavy, crushing metal tones with some feeling behind them and that’s what really counts across the album. “Let Crack the Whip” sticks firmly in the mid-tempo, but slight alterations in speed, as well as a riotous and groovy chorus make it an absolute keeper. The band’s use of mid-tempo groove is rather on point, and it really helps out cuts like “Plague Storm” when they speed up a little bit (not to mention pull out all of the melodic guns with some fanciful solos). The leadwork tends to be pretty playful, such as in “Rogue Weapon,” which provides a good contrast from the otherwise visceral energy that the band gives off.

Influences may be tattered all across Bear Mace’s sleeves, but it doesn’t stop Charred Field of Slaughter from being a fun nostalgic trip. The energy is right where it needs to be, and the enjoyable solos and groovy bits make sure that you’ll be moving right along with the music while sounding a battle cry.