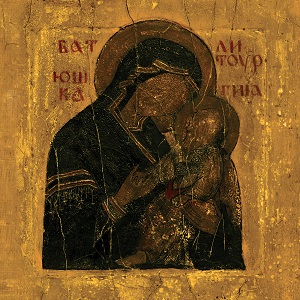 We’ll leave it to the better judgment of the experienced folks at Metal Blade as to why they’re issuing an album that was released two years ago. After all, the subject at hand, Poland’s Batushka, are somewhat of a hidden commodity. Then again, it’s not like we’re dealing with a black market release finally seeing the light of day; the internet makes music from all corners of the globe available. But what matters is the label is giving a mysterious troupe a greater platform for their music. The issuance of the band’s Litourgiya should pay off for both sides.

At its core, Batushka is black metal, although they tend to push things out well past anything resembling orthodox BM. We can quickly point to latter-day Rotting Christ or even a highly underrated act like Animus Mortis, a band who blends those dashing melodic riff exploits with lush atmosphere and tenacity. The same just about applies with Batushka, who often blend elaborate and spell-binding motifs within either blast-away tempos or slow, grueling paces, like on the album’s formidable closing cut “Yekteníya VIII – Spasenie.”

Litourgiya is an album that builds and builds, never quite coming close to toppling, if only because Batushka’s spiraling riff motifs, occasional use of female vocals and exotic plays on black metal keep it in towering territory, if you will. And while there’s plenty to bridge Litourgiya and Batushka as a whole to, the fact of the matter is the Poles, in their elusive and enigmatic state, are thoroughly distinct and captivating.