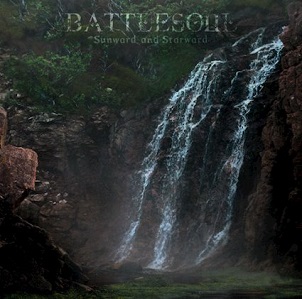 Whether it’s a drum machine or real person hitting the skins on Sunward and Starward is perhaps best debated at another time (we say it’s a drum machine; the band lists personnel stating otherwise), the idea with Battlesoul is that they’re not the same-old-same-old blackened epic metal band. They are wise to avoid swords and chainmail in the promo photos and often don’t fall prey to the same sonic stumbling blocks as bands with higher profiles, leaving them in good shape on Sunward and Starward, their third full-length to date.

The differentiator here is vocalist Jon Doyle, who doesn’t possess the menacing bark so often accompanying metal of this form. Rather, he’s got a pretty clear, well-enunciated rasp and isn’t afraid to sing, like on the excellent “Arrival,” a song that would probably make Ensiferum drip with envy because of its melodic grace and compact nature. But that’s not really Battlesoul’s focus. Extreme metal is, and they cling to it throughout Sunward and Starward’s ten cuts, like on the blinding opener “All I Understand” and chunky “The Watcher.”

It’s a bit of a unique, almost unchartered blend, really, Battlesoul not necessarily combing the ground for old ideas, but twisting the style into their own (Canadian?) form. Regardless, Sunward and Starward sticks the epic metal landing, can run (and sail) in league with the Vikings and make themselves at home with their folk metal brethren. They’ve gone somewhat unnoticed, all tucked up there in the north, but here’s to hoping the rest of the epic folk metal gang will send Battlesoul a raven and invite them in for a council meeting, or something.