Battlecross – War of Will (Metal Blade) 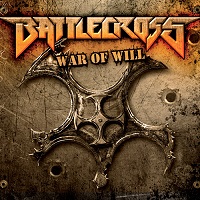 Coming off a successful debut album, Michigan’s Battlecross proverbially could coast into their second studio platter for Metal Blade creatively and be rest assured their fans would be satisfied. But that’s not in the DNA for this modern American heavy metal outfit who combine the best in thrash, extreme, and a little bit of crossover to obliterate your mind and body with their potent sophomore outing, War of Will.

Buoyed by guest drummer Shannon Lucas (The Black Dahlia Murder), Battlecross appears focused to strike with immediacy like a pack of wolves feasting on prey throughout these 10 songs. From the opening thrash riff salvo “Force Fed Lies” to the concluding point/counterpoint stair/step action that constitutes “Never-Ending Night,” these are 36 minutes of pure metal ferocity on multiple levels which forces aural enjoyment.

Kyle ‘Gumby’ Gunther pulls out another larynx-busting, blood-rushing vocal performance, using dual growls and screams to emphasize key points in “My Vaccine” and “Wage a War.” Bassist Don Slater again astounds with his profound knowledge and skill-set at the low end action, keeping up with the guitarists and tapping/slapping literally ‘at will. Check out his work during the Meshuggah-like section of 1:48-2:24 of “Flesh & Bone.”

The stars of War of Will beyond the songs themselves are the dual axe team of Hiran Deraniyagala and Tony Asta. Peeling off In Flames-like harmonies for “The Will to Overcome” then executing a series of jazz-like slower syncopations in the closing strains of “Get Over It,” they’ve really gelled well as a duo and keep the hooks coming at you sharp.

Get ready for Battlecross to move up to headlining status by the conclusion of this album’s touring cycle. War of Will is a rallying cry for American metal, synthesizing the best of all sides of the extreme, thrash, and modern genres to champion for the genre.