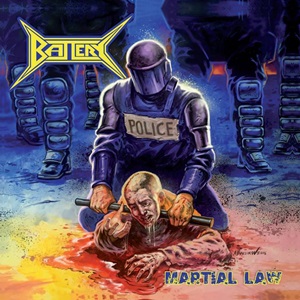 Primal thrash – the essence of the genre – sadly got lost as the movement gained mainstream attention during the first wave of the late 80’s (Testament’s “The Ballad” ring any bells, or Exodus’ Force of Habit). Only natural given the chew it up/ spit it out nature of major media and major label exposure we suppose. It’s great though to hear acts like Denmark’s Battery stepping up to the plate and getting back to the heart of the movement through their recordings. Following up the fundamental ferocity of 2014’s Armed with Rage, the second full-length Martial Law sees a drum stool shift in Jonas Thygesen replacing one of the founders Andreas Joen – but have no fear, the quintet has not relinquished the speed, adrenalized riffing, and manic vocal with gang supplementation to stir the pit and bash bodies.

Frantic Jeppe Campradt leads that appear to go over the rails make “Kukulkan” an early favorite, the Overkill-ish bass as upfront as the slice and dice axe riffs recall prime time Razor affinity, although the call and response gang background vocals scream late 80’s Bay Area Vio-lence. When Battery chooses to decelerate, the effect becomes catchier and hook-oriented, as there are sections of “2083” where flipping between mid-tempo runs and semi-tribal strains allows for deeper connection and probable audience annihilation. You can also tell there’s a bit of a punk and death vibe going on through the rhythm section work of instrumental “Forced Retaliation”, where bassist Jannick Nielsen gets full force progressive props to keep up with the hyper-paced neck action of Jökull Johannesson and Mr. Campradt. Singer Chris Steel takes his vo-kills to the max, letting out some maniacal screams and low growls throughout the record – check out “Evil Offspring” and “The Rapture” from some of his sinister deeds on the microphone.

Another record that sounds more analog than digital (the snare snap and guitar tone send smoke signals from 1985), Martial Law delivers ten tracks and 33 minutes of aggressive thrash without any commercial aspirations in sight. Just the way the denim and leather brigade would want. 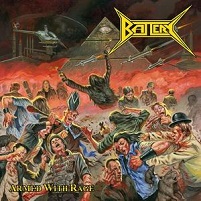