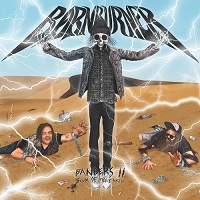 With no real desire to score highly on the cerebral scale with songtitles like “Keg Stand and Deliver” and “Skid Marks the Spot,” Barn Burner prove that one can get away with humorous-sounding songs

if the goods are there to back ‘em up. On their second album, Bangers II: Scum of the Earththe Canada-based power rockers (we struggled with our usual strings of adjectives this time out) run through a set of bruising jams designed to go for broke and to get the heck out of town.

Falling somewhere between the alcohol-addled swivel of Viking Skull and Valient Thorr, Barn Burner have a relatively noticeable stoner vibe to them, which is weird considering the bulk of the songs here are fast. Most stoner rock/metal is never in a hurry to get moving, but on opener “Scum of the Earth” the Canucks meld punk-inspired riffs with thrash metal tempos. The same bodes for “Gate Creeper,” which locks into a burly groove, while “Skid Marks the Spot” is snappy and goofy, complete with a call-and-response chorus.

Quite difficult to get all the way behind this, for Barn Burner’s style lends more to the live arena than in studio. For the most part, Bangers II: Scum of the Earth is largely unmemorable, save for its funny

and easy-to-remember songtitles. Perhaps the band should do things the other way around: Write more memorable songs and worry less about being “cute” with songtitles.