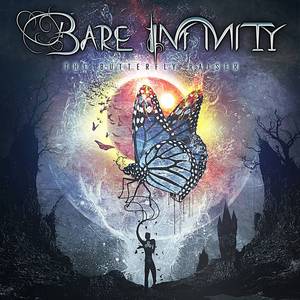 After an initial offering back in 2009 and a subsequent revamping of the band back in 2014, the road forward may not have been the easiest to the Greek symphonic metal act Bare Infinity. But those who come to weather the storm often appear the wiser and better for it, and the act’s sophomore effort, The Butterfly Raiser, is certainly proof that the tide is indeed turning in the band’s favor.

One can fire out all of the usual comparisons to Bare Infinity’s brand of metal (that being Nightwish, Delain, Epica, et al) but it shouldn’t hinder one from checking it out in full. For while the formula is in fact familiar, Bare Infinity does their best to give it their own stamp to move forward on. First and most obvious is that of vocalist Ida Elena, whose rock-ish (as opposed to operatic) vocals are a clear centerpiece to the act, and certainly have the flair to take the band to the next level. Whether it’s the catchy, melodic flavor of “Hear Me Out,” the soft ballad “Robin’s Eyes,” or a heavier number like “In Desertis,” Elena’s vocals carry an enigmatic and emotional power. But the band wisely chooses not to focus squarely on their vocalist (as some of their brethren have a tendency to do) and the diversity in tracks widens much further than just vocals. Proggy synths permeate “Ashes,” one of the album’s heavier cuts, giving it a more mult-faceted approach. Some Middle Eastern flair also finds its place in a few tracks (“In Desertis” and “Orion’s Light”), and the trade-offs between heavier and more epic sounding tracks and melodic songs serves the album well over its nearly 65-minute runtime. Some of this is handled by some shredding riffs, some by rich leads (see “Reaching for the Sun”), and elsewhere by grandiose keys and progressive moments.

An impressive second outing by Bare Infinity, and The Butterfly Raiser sets the bar high for what the band wants to achieve in the future. Those looking for an energetic, fresh, and diverse offering within the symphonic metal crowd have met their match with this one.