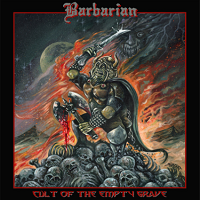 Running Wild and Venom are name-dropped for Barbarian’s Cult of the Empty Grave. Given the famed pirate metallers current state of festival-only activity and Venom’s never-ending string of subpar albums and Venom Inc. competition, it seems like an unlikely connection. But, in Running Wild’s early days, they embraced a proto-Satanic look, one that pushed them right into Venom and Hellhammer territory. Rolf Kasparek and clan would eventually ditch their leather and upside-down cross phase for Calico Jack on 1987’s Under Jolly Roger, yet the influence of the band’s early albums remains, as evidenced by the approach taken by Barbarian here.

Rumbling down the strip with a classic drum battering-ram front (think Motorhead), and beefy, meaty riffs, Barbarian’s sound largely reflects a period where metal was totally simplistic and certainly no tomfoolery was allowed. The constant churn of a good portion of the cuts found here easily tie into Venom’s classic constructions, in particular, the raunchy “Whores of Redemption” and “Supreme Gift.” As the title indicates, “Absolute Metal” serves as the album’s isolated call-to-arms number, while the punchy “Bone Knife” works in and around mid-80s Celtic Frost, meaning, of course, Morbid Tales.

Barbarian (who are branded with their home country in their name considering the large number of bands sharing the same moniker), are your tried-and-true Hell’s Headbangers band. It’s not like zero thought is required with this stuff, but if you’re looking to put your head down, push your way through a crowd (of posers), and salute the glory days of metal, here’s another fine representation. Just don’t expect Barbarian to start wearing eye-patches anytime soon…