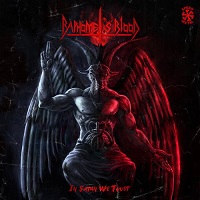 As if the name weren’t enough of a giveaway, Baphomet’s Blood are all about Satanic speed metal. The Italian thrash quartet formed in 2003 and has since released two demos, two EPs, three full-length albums, and a three-cassette compilation box set. With some form of release nearly every year up until the box set in 2012, safe to say the Satanic speedsters keep themselves busy.

Although it’s been almost five years since the band has written and recorded new material, Baphomet’s Blood hasn’t lost a step. With its fourth full-length and latest offering, In Satan We Trust, we get seven originals and a Farao cover (“Eleg”) clocking in at just over 40 minutes. Imagine, if you will, an unholy union of Dark Angel and Exciter, toss in some down ‘n’ dirty Motörhead attitude and the rawness of Speedwolf, and that will give you a pretty clear indication of what to expect from Baphomet’s Blood.

The subject matter of the songs mainly consists of getting drunk, worshiping Satan, and praising heavy metal. While lyrically the band is in line with Venom, when it comes to songwriting they are on a higher level than the English trio. While that’s not saying much, as Venom was more about the shock and awe spectacle than the musicianship, Baphomet’s Blood know how to pen in-your-face, grab-you-by-the-throat riffs paired with enough NWOBHM-style melodies to keep the songs fresh in the mind after the record stops playing.

The break-neck pace and melodic guitar runs of “Hellbreaker” make it sound as if it could have a place on Judas Priest’s Painkiller, if not for guitarist and vocalist Necrovomiterror’s whiskey-soaked, gruffer bark. When it comes to speed metal versus thrash, speed metal tends to make use of razor-sharp riffs cranked out at super-sonic speeds with less of a focus on the low end, while thrash often injects more heft and groove to the proceedings. And while Baphomet’s Blood is speed metal through and through, there’s enough added meat on the jack-hammer riffs, thanks to bassist Speed Necromancer, to go toe to toe with any of the thrash titans. For an example, see “Infernal Overdrive,” especially when Necrovomiterror and guitarist Angel Trosomaranus dial back the tempo to a mid-paced stomp about halfway through. Knowing when to lay back and let the six-string riff parade take over, drummer Bestial Hammer effectively lives up to his namesake behind the kit with his double-bass, blasts, and fills.

One of the nice things about Necrovomiterror’s rough ‘n’ tumble vocal delivery is the words are easily understandable. Although an accent is present, especially in the chorus of “Triple Six” where he pronounces it as “try-pull six,” it never gets in the way of understanding what he’s saying. Vocally, Necrovomiterror carries the weight throughout the album, as gang-shouted backing vocals aren’t prevalent and are utilized in more of a spot-check manner, such as the “six, six, six!” shouts on “Triple Six.” Another nice addition to the record is the use of movie sound bites in the intro of a few songs, especially opener “Command of the Inverted Cross,” which suitably features a clip from Rob Zombie’s The Lords of Salem.

Thinking man’s thrash, this is not (seek out Vektor and Voivod if that’s your preference), but if cracking open cold ones, moshing and stage-diving with your patched-vest and denim ‘n’ leather-clad brethren in a dingy, hole-in-the-wall club is more your speed, then you’ll be right at home with Baphomet’s Blood.