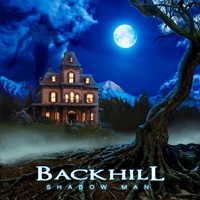 Rarely in the melodic metal genre do you find a multi-instrumentalist willing to tackle numerous roles for the benefit of focus and a final product- but this is the case for Finland’s Backhill and their debut album Shadow Man. Ex-Celesty vocalist Kimmo Perämäki handles guitars, keyboards, bass, and vocals for these 10 tracks, seeking out drummer Marko Ylä-Häkkinen to handle that department rather than taking the ‘computerized/programming’ route. Considering Kimmo’s past happy power metal ties, it would be easy for Backhill to resort to the same template – yet Shadow Man has more of a classic and traditional feel in terms of structure, chord progressions, and hooks to keep the proceedings less cliché to offer something a little fresh.

Remember the era of the 1980’s where a certain class of artists put as much emphasis on simpler hooks and riffs to straddle the lines between say Dokken, Fifth Angel, and Leatherwolf – or maybe Pretty Maids from the European side? That’s the feeling that bubbles to the brain stem when taking in catchy material like “Rich Inside” and “On Burned Ground” – Kimmo keeping his riff choices and transitions very focused and simplified as to maximize retention right off the bat. He displays great lead break ability and intertwines some cultural/Celtic elements during personal favorite “Time Won’t Wait Your Crying”.

Marko aids the cause for Backhill’s approach – he can be steady and subtle given the feel of certain arrangements, especially evident in a Cozy Powell manner on the shape shifter “For the White Flag”, where Kimmo’s layered vocals during the chorus have a ‘London Bridges’ similarity. Kimmo’s vocal influences certainly come from the Kiske/Tate school of metal: vibrant, expressive, soaring when called for or restrained during the acoustic driven ballad “Living in a Lie”.

Potential definitely reigns within Shadow Man, but overall the songwriting doesn’t have that extra dynamic nuance or ‘it’ factor to really rise to continual playback status. I’d imagine Backhill floating in that netherworld where many artists hoped to become the next Queensrÿche and only achieved third-tier admiration – let’s see if time plus experience can sail this ship to brighter, shimmering waters.